Updates will be at irregular times over the next 2 weeks due to the fixture schedule over the busy Xmas and New Year period (follow on Twitter for details of when updates are made).

Poisson predictions v2.0: xG predictions are calculated based off xG, team strength, current form.  A second model based on xG only is in the final columns (NB: just because there is value, it does not mean the team will win.  The predictions do not take account of team news and should be used as a starting point for further analysis – see spreadsheet guide noted above). 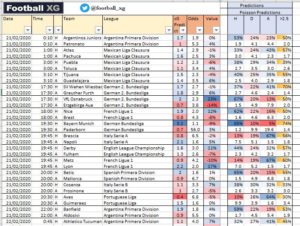